CAUGHT BY TRAFFIC II , By AUTORAJ 
Autoraj has officially taken up residence at the 1.Shanthiroad studio/gallery.Autoraj is the india leg of a project that attempts to re imagine cities from the position of drivers of public transport. The project doesn't just look at any public transport, but forms of transport that can be thought of as operating between the cracks of policy and regulation. In the case of Bangalore the Rickshaw driver is the focus of the project. What kind of Bangalore can be constellated from his perspective?
The project poses art making as a kind of visual research process, and will be an ongoing and fluid questioning of connections between people objects places, sounds and images. The gallery will function as a kind of studio or project space and will be open daily from 13:00 - 16:00 until the 24th of August.

Caught by Traffic is a project by Zen Marie, an artist based in Johannesburg South Africa and is supported by WITS university's faculty of the humanities, the institution where he teaches.
www.zenmarie.com 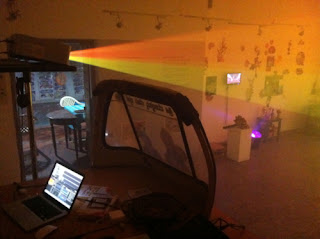 For more information on the project visit the blog at http://autoraj.tumblr.com/