'RECIPES FOR CHANGE...S' by URMILA NAIK 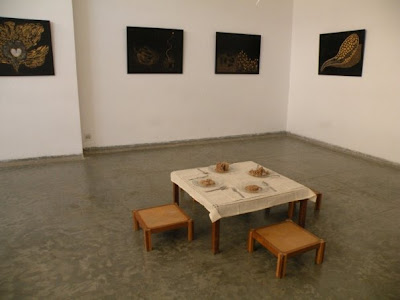 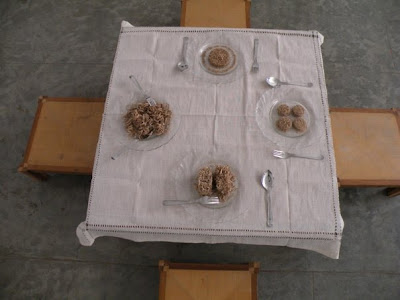 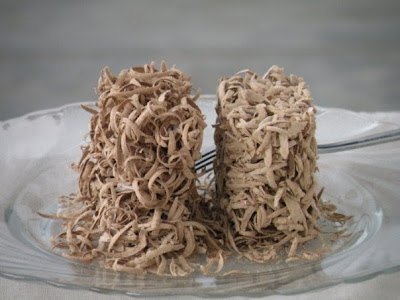 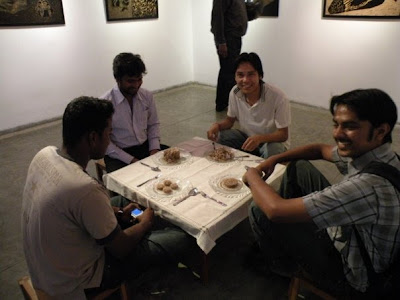 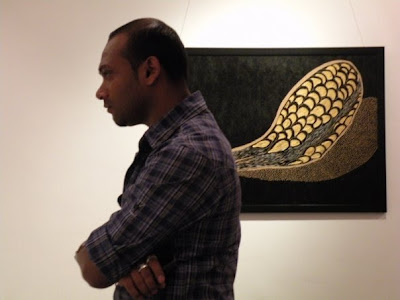 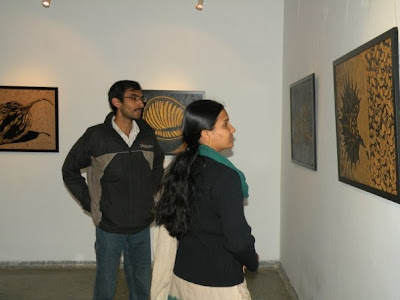 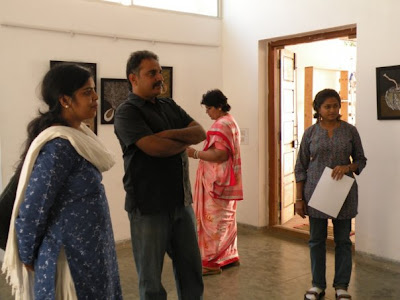 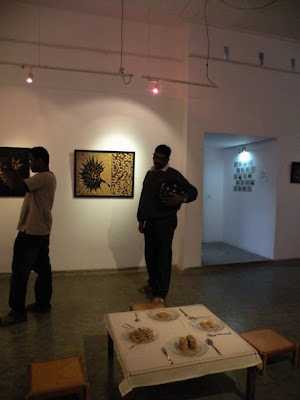 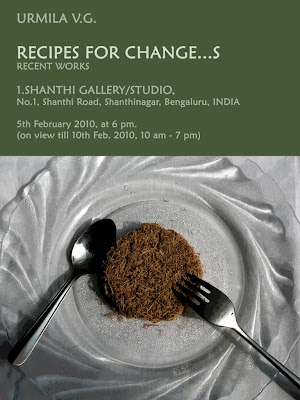 Posted by Suresh Jayaram at 1:07 PM No comments: 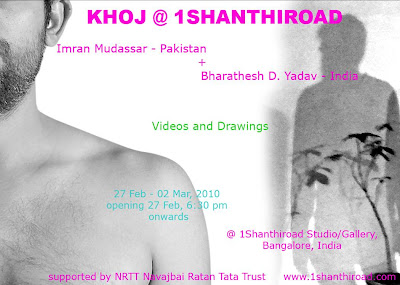 From: Time Out Bengaluru ISSUE 17 Friday, March 05, 2010
Two artists level up on their ideas about the Indo-Pak showdown in a new collaborative project, says Jaideep Sen.
Bharathesh D Yadav accepts that the suggestion of war and strife,
blockades and uprisings, combat zones and military action as an
everyday, accepted part of reality in Bangalore is unimaginable, and
damnably close to being ridiculous. Vulnerable as the city might be,
as a target for an inspirited and unswerving token of the most
unstable arsenal of the nearest hostile body politic, Bangalore, apart
from an attack on the Indian Institute of Science, has so far asserted a
relatively unstirred, friendly countenance.
However, if it were up to Yadav, he would be leading bristling
battalions of wholly peaceful youngsters from back home to the
front, wherever that may be, chanting tirades for the cessation of all
hostilities, of whatever manner, hurling the choicest of invectives in
Kannada against every perpetrator of any form of armed conflict and
atrocity. Yadav, who recently hosted a solo show titled eXtra Large, with his personal takes alluding to the general proclivity of deifying cinema idols, resulting in a perspicuous mockery of near-absurd beliefs of divine manifestations, is no stranger to the estimations of incongruity and irony. The biggest grounding factor for the artist, if only in terms of introducing a more contiguous and trenchant sense of distress and anguish in his work, is perhaps in the presence of Lahore-based Imran Mudassar, with whom he will be collaborating as part of a Khoj project this fortnight.
Suresh Jayaram, art critic and facilitator of south Asian artist residency programmes, explained why the two artists were appropriate for this project. Barely a year after he was out of the National College of Arts in Lahore, Mudassar sold out his entire collection of drawings that ponderously morph his anatomical figure with war-related contrivances – “the clients were mainly foreigners,” he said – and was promptly hailed as prodigious by the media, notably by the Pakistani critics at Dawn and the American news agency CNN. Once the perfunctory months-long fusses between the embassies of the two countries were dealt with, the intention was to bring in someone who worked in a manner similar to the Pakistani artist, said Jayaram, creating art based on the human body. Yadav, with his abstractions of ambiguous identities, and a personified sense of cultural conflict, made for an ideal complement. About a week before the opening of their show, the artist duo was as yet thrashing out ideas on the floors of the studio gallery 1, Shanthi Road. Walking in on one such session of video shoots, if you hadn’t known better, it would’ve been close to impossible to tell one from the other. As the scene had it, two young men, both in the mid to late-20s, smug and bare-chested, stood at ease and shoulder-to-shoulder; one of them clean shaven and in a Pathani salwar, the other bearded, in loose-fitting jeans. Both of them taking turns at twitching a bit, cringing and shrugging ever so mildly, like they were brushing aside an annoying, intrusive insect. Yadav described the shot – their two reactive comportments are devilled by a makkhi (Hindi for fly) that finally, mainly by way of animation techniques, traces out the political map of the country of India.
Mudassar, who hails from Burewala in the Vehari District of southern Punjab in Pakistan, confessed, in chaste Urdu, that up until a few years back, he actually wanted to join the armed forces. Those aspirations changed after a few violent outbreaks in his neighbourhood, and a brief visit to Kabul, where he encountered the actualities of war – in battle-ravaged homes and battered street walls bearing the evidences of constant backyard bombardments. One of his noted works inscribes one of these walls with the shape of a human, lending the effect of bloodied wounds to the shell scars and blasted sections of masonry. At the current show, Mudassar said he would paint a mural, and present a piece in which a paper silhouette of a man would gradually be riddled by stones hurled at it. Yadav, in turn, spoke of how the large part of references that he had, to understand the people of Pakistan, was in media images; “whenever we see Pakistan, it’s in war-time situations”. For his installation in the show, Yadav described an assemblage of people, agape facing the skies, being invaded by an alien body, or form of spore,which takes turns to run down the throats of each member, and explore their entrails. “The body is a hangar, as fashion designers say,” said Yadav. “It’s a canvas. But I prefer internalising the idea of a body. For example, how one’s body language immediately changes once they know that someone is gay.” The construct of a human body for Mudassar, in contrast, was reduced to pickings from debris. “The body is only flesh, blood and bones,” he said. “Weapons destroy the body. If China and Pakistan exchange fighter planes, what is the ultimate purpose? They will only destroy more bodies.” As for his art, nobody was interested in visual exemplars and keen illustrations, as much as they wanted a reflection of contemporary realities, he added. “Agar mein jahaaz or thop ko chod ke landscape paint karu (if I gave up warships and missiles to paint landscapes) nobody would be interested,” he said. In all of that, neither of them was certain if the map that the fly charts out in their video ought to include the region of Kashmir or perhaps even go back to a pre- Independence depiction. To get the last of that, you’d just have to drop in at the show.
Source : Time Out Bengaluru ISSUE 17 Friday, March 05, 2010 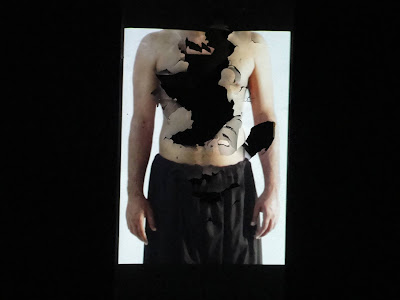 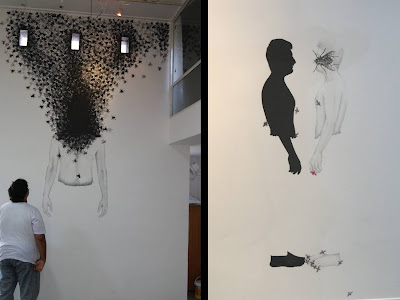 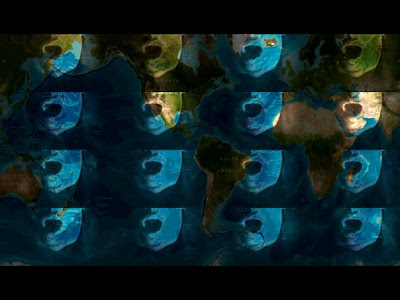 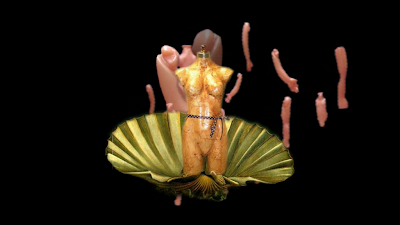 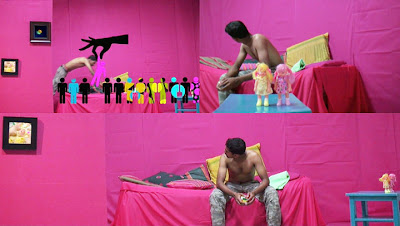 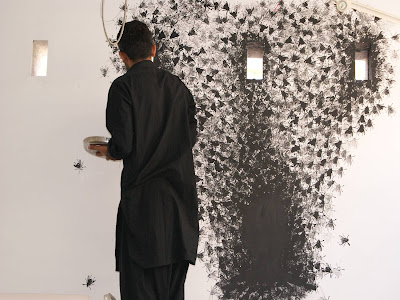 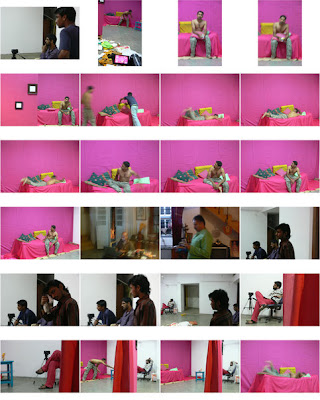 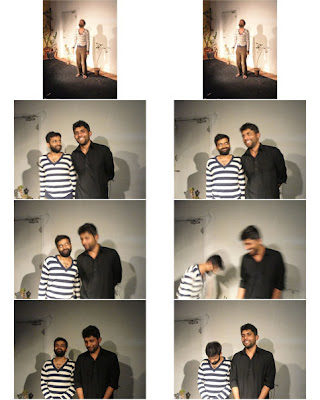 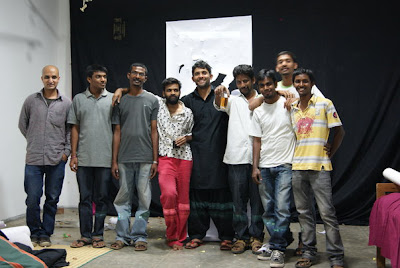 Bharatesh has been focusing on the body and it’s representation. He explores the sexual and sacred self to discover the multiple dimensions of the inner landscape. The references to Virashiva poetry and its radical thoughts about the body as a site and a space for the interior landscape. To look within and internalize the universe with in the self.
Bharatesh has been focusing on a figurative expressions, his representation of men in situations of contemplation and conflict have an enigmatic quality. Recently he has been constructing personal narratives that involve himself and his family. This departure has led to images of the self in metaphorical situations. He brings a persona of himself into situation that question situations about reality in an oblique way. Bharatesh chooses to be the protagonist in his work. His reference to himself is the beginning of a new journey in discovering his identity and affirming himself as an artist. He moves in a path traced by his contemporaries to find his space.
Bharatesh has been positioning himself through popular religious imagery; he translates these iconic images onto himself. He carries the mantle of relating ancient iconography, mythical images in times when religious excess is questioned. By representing himself in the multiplicity of the Hindu pantheon he stakes her claim to be a part of the divine manifestations of our culture.
The result was a great collaboration with two young artists, living and working together in the true sense of collaboration. Bharatesh’s technical staff, a group of local students from Chitrakala Parishath who were part of the big crew who helped in the process. They were Harshavardhana, Venkat Reddy, Vineesh Amin, Mithila, Lokesh, Hitesh, Deepak, Shailaja, Gururaj,Sandhya,Chetan,Meenakshi,Varsha,Pooja.
This was the ripple effect of the collaborative event and will unmistakable be a successful Khoj@1.Shanthiroad event. Specially locating it in the context of the turbulent political situation that two countries share.