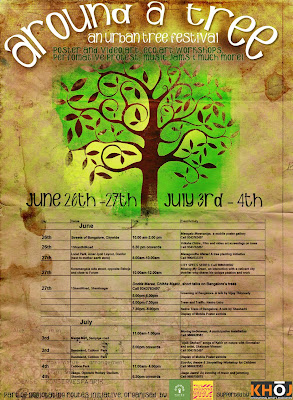 Posted by Suresh Jayaram at 8:27 PM No comments:

Manegondu maraa - (a tree for every home) Tree Planting 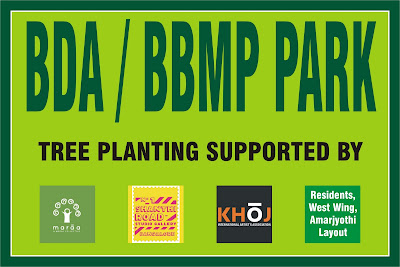 In the wake of the changing landscape of Bangalore, we have seen an unprecedented depletion of tree cover. This is the price we pay for city development and unorganized planning. The government has made few attempts of transplanting trees. There have been no conscious efforts to put into place Arboriculture and other scientific approaches to tree management nor is there an attempt at making it a collaborative effort with the citizens. Negotiating Routes-Ecologies of the Byways* is an attempt to involve the public in planting the trees they love. This is a private-public partnership to green the city in a small way while keeping in mind the urgent need for bio-aesthetics by planting local trees. This project has been initiated by KHOJ New Delhi with local collaboration with VAC/1.Shanthiroad, Maara and Amarjothi Layout Residents Welfare Association, Domlur.

In this project each family living in the locality will plant and nurture a tree in a designated park. This will specially involve children who will be encouraged to adopt a particular tree. A ledger will then be maintained by the children who will be assisted to monitor the progress of the tree. This will be compiled into a book by the welfare association.

*Negotiating Routes: Ecologies of the Byways
Inspired by the need to render "the world a big forest, making towns and environments forest-like.", Negotiating Routes: Ecologies of the Byways, is a 2 year project inviting reflection by artists on the anxiety of ‘development’ embodied in the rank infrastructural development across India and its coexistence with local ecologies.
Over two years, Negotiating Routes hopes to map the various project sites across the country to create an alternative road map where artists and communities have come together and have been involved in discussions on the regeneration of the local ecology of the cities or villages that they inhabit.
This project was initiated by Varsha Nair and is co curated by Pooja Sood at KHOJ.


All are welcome!
Posted by Suresh Jayaram at 8:22 PM No comments:

Rohini is an actor, sculptor, writer, runner and recent graduate from CKP whose interests come together in sculpture and its metaphors.
Shohini is an artist who uses photographs to weave allusions. Her works have been exhibited in Cairo, New Delhi and Bengaluru

STREET SCHOLARS seeks to initiate discussions that bring a certain kind of reflection to bear on our varied practices, our ways of engaging the world, (artistic, political or academic).

It grows out of dissatisfaction with the way our intellectual engagements have become routinized. The political, economic, ecological and intellectual crises that convulse the current period urgently call on us to rethink many of our presuppositions. We believe that such reconsideration requires us to reclaim the notion of reflection as an active dimension of our activities rather than as something that precedes or stands outside of them. Scholarship should be alive, like the streets, to questions and to ways of reflecting on them.

Street Scholars hopes to partner with anyone, or any institution, that is trying to formulate new areas of inquiry. We believe this kind of collective reflection could enable us to build a new critical vocabulary with which to understand the issues that impinge on us and to formulate new commitments. We especially seek to engage the explorations of young researchers and artists.
Posted by Suresh Jayaram at 10:26 PM 1 comment: 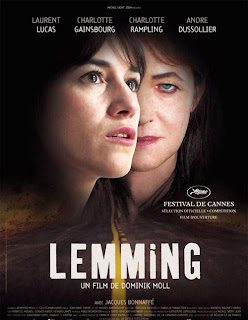 ‘Fantastic Friday’
Film screenings around a common theme are always useful because they help us to understand categories and sub-categories and the first step in ‘knowing’ is perhaps being able to categorize. ‘Fantastic Friday’ emerged as an idea after the session of Pakistani horror films organized at 1 Shanti Road through the initiatives of Achal Prabhala and Zac O’Yeah. The idea was to have theme based screenings and to begin the screenings with a series of ‘fantastic’ films.
The term ‘fantasy’ is often loosely used but, by and large, the ‘fantastic’ is generally acknowledged to fit into three separate categories. Two of them are related to each other and involve the recounting of strange events that appear to defeat rational explanations. The spectator hesitates between a rational/ scientific explanation and a super-natural one. If, as in the ghost story, the final explanation is a supernatural one, the film is ‘fantastic’. If the explanation finally decided upon is rational or scientific, the film may be called ‘uncanny’. If the ‘vampire story’ is a category, Dracula is fantastic while the Sherlock Holmes story The Sussex Vampire may be considered uncanny.
The third category stands apart from these two and is called ‘marvelous’. While the first two categories deal with the real world in which a fantastic element is introduced, films under the ‘marvelous’ category propose an alternate world and an example would be Lord of the Rings. Most folk tales would also fit neatly into the third category. The categories are not airtight and many films combine two or more of their aspects. In fact, it would even be an interesting task to speculate about what category each film would fall into.
The films being shown in 1 Shanti Road’s ‘Fantastic Fridays’ belong to all three categories. Needless to add, the films are all chosen because they are highly watchable and hardly ever seen even among film society audiences in India.

This film is intriguing and it would spoil one’s enjoyment to know what it is about. It is enough for the audience to know that it is about a young couple, whose kitchen drain is clogged. When the husband opens up the drain he finds a small rodent stuck inside. The rodent is identified as a Lemming – from Scandinavia and widely believed to commit mass suicide annually to keep its population down.


MK Raghavendra is a film and literary critic/ researcher, the founder-editor of the film journal Deep Focus. He received the National Award (the Swarna Kamal) for best film critic in the year 1997. He was awarded a two-year Homi Bhabha Fellowship in 2000-01 to research into Indian popular film narrative as well as a Goethe Insitut Fellowship in 2000 to study post-war German cinema. His book Seduced by the Familiar: Narration and Meaning in Indian Popular Cinema was published by Oxford University Press in 2008. His essay Local Resistance to Global Bangalore: Reading Minority Indian Cinema appeared in Popular Culture in a Globalised India, published by Routledge London in December 2008. His book Fifty Indian Film Classics is being published by Harper Collins. He is also the Founder-Editor of Phalanx (www.phalanx.in) a web journal dedicated to argument and debate. He has been on several national and international film juries.

CALL FOR POSTERS
TREE FESTIVAL
Dear Artists,
1SHANTHIROAD and MARAA are collaborating together on a TREE FESTIVAL as part of the "Negotiating Routes", an initiative by KHOJ
we request you to send us your posters, graphics and images concerning "Trees".
You can send us images of your previous work to be exhibited during the festival.
The Festival is scheduled for 25 - 28th of June 2010
size: A3
resolution: 300 dpi (not more than 4 MB)
email the images to: 1.shanthiroad@gmail.com
Last date: 20 June 2010
* Please get in touch with us if you are interested in participating or involving in any other form for this program.
http://katte-beingathome.blogspot.com/
www.1shanthiroad.com
http://1shanthiroad.blogspot.com/
www.maraa.in
Posted by Suresh Jayaram at 7:00 PM No comments: