OPEN CALL for the collaborative project scheduled in Feb/March 2010


VAC – VISUAL ART COLLECTIVE IN COLLABORATION WITH KHOJ AT 1.SHANTHIROAD

Since it’s inception in 2003 1shanthiroad has grown to house artists from diverse countries in its residency programmes. It believes in fostering interactions between artists, curators, scholars, writers and young students in the local and global context. We collaborate, share and have interactions with the local artist community.

The residency programmes provides an opportunity to interact, experiment and work with local materials to extend one’s visual language. Bangalore offers diverse inspirations as a cosmopolitan and is an eclectic city. The artists of the city have straddled diverse genres and are part of the divergent contemporary landscape. The challenges of the residency programme will encourage artists to move beyond the comfort of their studio spaces and work in new circumstances.

Khoj International artist association (New Delhi) has been partnering with us in a special programme that focuses on collaboration between South Asian artists. This has been generously supported by the Navajbhai Ratan Tata Trust. The intent of collaboration with artist creates a network with likeminded partners.

The rationale behind this program is to facilitate an opportunity for artist to live and work together, encourage inter personal contact, build trust and lasting friendships with the artist community.

So far it has been very encouraging to network with these groups and learn from their experience. This also strengthens the core agenda of KHOJ and 1Shanthiroad in Bangalore and southern India for creative collaborations and conversations.

Please email your application to 1.shanthiroad@gmail.com with the following.

• C.V.
• 5 images with title and details in Jpeg format (each image max size of 1mb)

NOTE: This call is for Artists from Karnataka. 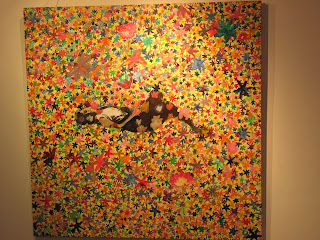 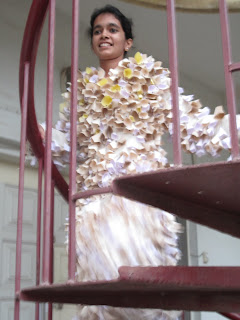 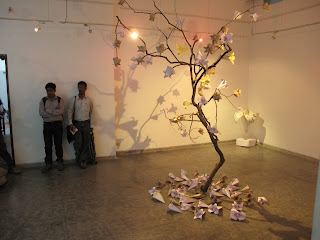 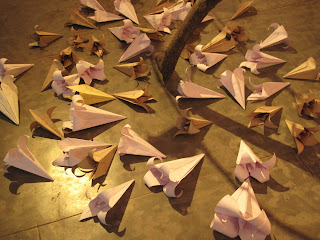 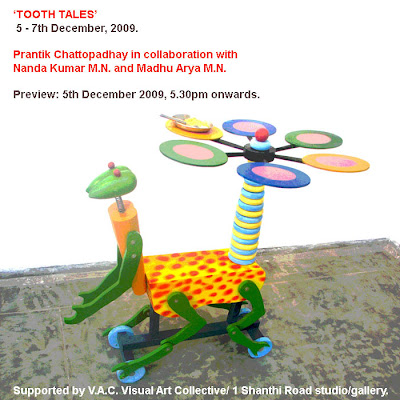 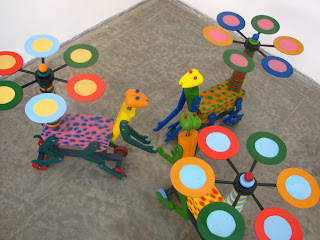 This is a collaboration with local and traditional toy makers with a contemporary artist. To create an opportunity to look at the craft of toy making as a language in the contemporary context.

The fear of tooth decay and the associated imagery of animated caricatures of creatures that infest tooth, are part of childhood memory, and contemporary advertisement are part of the artist’s imagination.

Prantik Chattopadhyay (an artist based in ) has worked with local craftsmen from Channapatna- Nanda Kumar M.N and his son Madhu Arya M.N to create an insect or composite creature that is part of the myth of worms that drills tooth. The obvious connection with food and desire is an everyday challenge as we negotiate life. The artist’s imagination creates a toy that seduces the viewer to indulge in food and warn us about the dangers of excess.


Posted by Suresh Jayaram at 7:44 PM No comments: 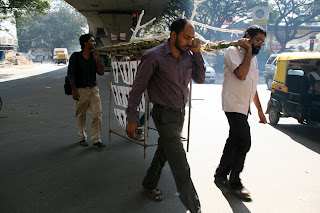 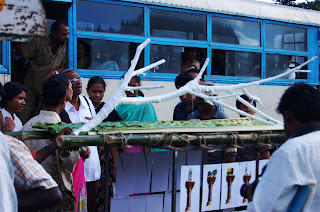 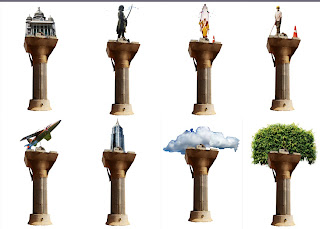 Madhu.D was away from Bangalore for six months and when he returned he couldn’t recognize his city. The accelerated change and erasures are inevitable here, the city seems like a construction site, a battle ground of change and resistance, loss and hope.
The unplanned chaos is unnerving; the change in landscape has left us with only real estate as a promise for the future. This is visual response to the absurdity of a city that is at siege, the moaning of loss and the mocking of a city that seems to be waking up late and has been caught napping.
This event is one of the many to focus on Bangalore, organized to look at urban issues and to ask questions. 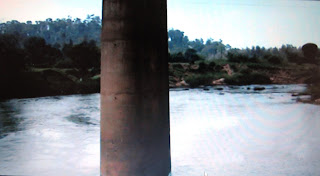 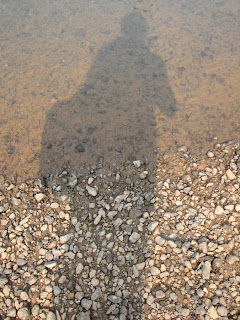 We are honored to have received the Robert Bosch Institutional Grant in 2009 for the support of local art initiatives.

The first awardee was Bhavani.G.S.


The Robert Bosch Institutional grant supports 1shanthi road studio to help young artists with their art practice in an effort to nurture local talent. It has been awarded to Bhavani.G.S for her video-“Journey with the river Cauvery”, this small video negotiates the landscape of the river, and it flows through the sacred and secular, private and public domains. The rivers in India are named after women and always refer to mythical origins, the use and control of river waters have been part of the dominant social and political discourses with sharing of waters for irrigation, building dams and harnessing hydro electricity. The visual narrative is a personal journey to locate the urban self and to question the faith that is passed on to her about the purity of water and its mythical and sacred associations heard from oral narratives.

Bhavani explores her relation with the most contested resource of water of river Cauvery and uses her body to navigate through the river till it forcefully reaches the metropolis of Bangalore. The images travel through traditional spaces of worship, contamination, rituals of bathing, washing and other communal activity. This poetic journey through the landscape has references to her earlier site- specific installations and interventions in landscapes using organic materials. This opportunity has opened new possibilities for the future and like the river will endure and nurture the artist.
Suresh Jayaram

"The Residency in 1shanthiroad Gallery/Studio was my first artist Residency. The residency was agreat exposure to me.It helped me work more confidently with new media. The library was very useful – spent lot of time reading.I was able to discuss my work with Suresh Jayram and take his guidance. The opportunity I got from this residency is I got to meet lot of people. I was able to spend more time with the residents here especially Janet, and Jennifer, from Australia with whom I shared my works and got good feed back. Marcus –video artist who visited them also gave me a good feed back." - Bhavani G.S.
Posted by Suresh Jayaram at 6:48 PM No comments: