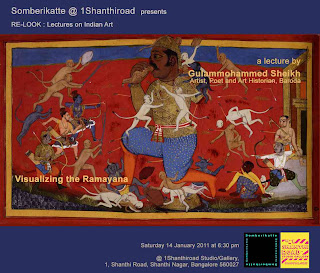 As students in Baroda during the 1970s and '80s we had the privilege of listening to Prof. Sheikh's lectures on miniature painting,  which brought alive a whole landscape and world as contemporary, argumentative and inventive as our own. We have the greatest pleasure in inviting him to Bangalore for Re-Look.
Visualizing the Ramayana
Over the centuries the Ramayana has been visualized all over Asia. Episodes or characters from the epic in its multiple variations and versions have been depicted in murals, folio pictures or miniatures, scrolls or patas and performing forms of leather puppets etc. The vast variety of depictions allows the epic to be viewed in plural rather than singular terms. While the images of the Ramayana uncover aspects of the epic only visualization can reveal, they may offer views other than textual readings. The more ambitious and fuller representations of the epic include the Mughal project at the court of Akbar, but the Mewar (17c) version by Sahibdin has nuanced the narrative with great élan. The Pahari versions equally locate the stories in a realm of their own. It is difficult to encompass the full range of Ramayana representations even from what survives. All one can do is to touch some of them to read the verbal tales somewhat differently.
Gulammohammed Sheikh, artist, poet and scholar, has variously taught in the Faculty of Fine Arts, Baroda as Professor of Art History and as Head of Department of Painting. He was one of the founders of Group 1890 in 1963, while at the same time being actively involved in the movement for modern Gujarati literature and has published poems, essays, and helped edit journals, in Gujarati, Hindi and English. He co-edited and published Vrischik, a small journal of arts and letters along with Bhupen Khakhar. He was part of the Place for People show which launched deeply influential ideas about narrative painting. Professor Sheikh has exhibited and lectured all over the world and published scholarly essays besides being on important committees in India like the Haksar Commission. In 1983 he was awarded the Padmashri by the Government of India and the Kalidas Samman in 2002.
Posted by Suresh Jayaram at 1:23 PM No comments: