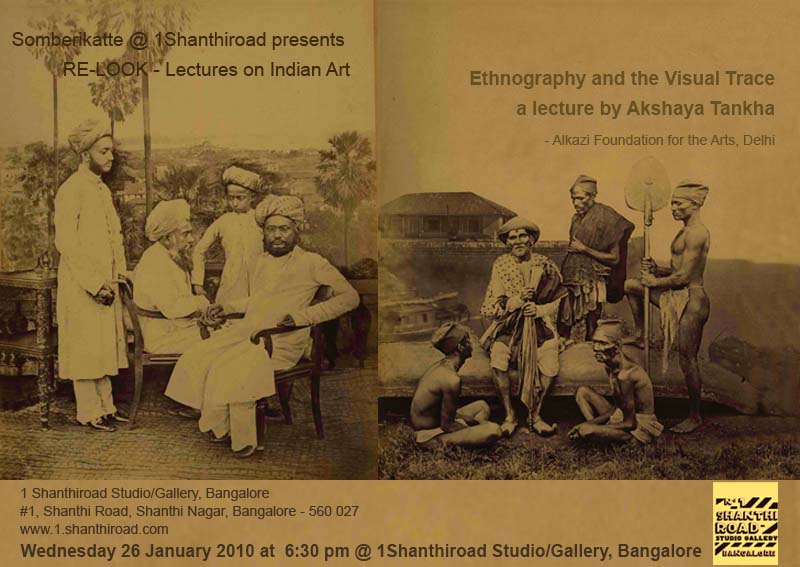 *RE-LOOK - Lectures on Indian Art
This series of lectures will present exciting new research being done in the areas of art history, art practice and visual anthropology in India, each for the first time in Bengaluru. Distinguished art historians and academics will be invited to give illustrated papers on their recent work and interests. There will be a lecture every month, which will take place at the popular artist space 1. Shanthi Road, situated in the heart of the city.
*Somberikatte: Somberikatte is a Kannada word meaning idler’s platform- usually the platform around a large tree where people gather to gossip and exchange news. It is a fictional institution, sometimes a forum, sometimes a film production company or the name of a photo studio, used by the artist Pushpamala N.
*1.Shanthiroad: The Studio/Gallery at 1.Shanthiroad, Bangalore, is an independent artist run space for art residencies, slide lectures, small conferences, installations, performances, screenings and informal gatherings. Centrally located with an award winning design, it was initiated by Suresh Jayaram and is administered by a not-for-profit trust VAC – Visual Art Collective.
www.1shanthiroad.com
Posted by Admin at 3:55 AM No comments:

Street Scholars: " Enchantment & Politics" - A Talk and a day-long Workshop

" Enchantment & Politics ” : A Talk and a day-long Workshop
...
Talk on January 4, 2011
@ 1Shanti Road, 6-8 pm
'Erotics and Agonistics in Rural Central India:
A Chapter in the Political Theologies of Popular Hinduism”
by
Dr. BHRIGUPATI SINGH,
- Post-Doctoral Scholar, Harvard University.
Dr. Singh has done extensive work on the Sahariyas of Rajasthan.
...

The process that transformed nature into natural resource also transformed human beings into citizens. Our world is shaped by that experience. How do we reimagine our inquiries and practices (our sciences and our politics)?
We engage Akeel Bilgrami’s recent work on these themes to explore the possibilities of re-enchanting life. The workshop is envisaged as a participatory event in which the audience is as crucial as the speakers.

Afternoon: “Nature, Science and the Unalienated Life”
Opening comments on Akeel Bilgrami’s work by Vivek Dhareshwar and Lata Mani to be followed by collective discussion
...

* Donation of Rs. 150 is requested though not a requirement for participation.
All are welcome.
For information call 9449836560
...
STREET SCHOLARS seeks to initiate discussions that reclaim reflection as an active dimension of our varied ways of engaging the world, artistic, political or academic.

Contact: thestreetscholars@gmail.com
...
Posted by Admin at 1:58 PM No comments: