Behind the Seen : Show extended to 4 Sep

Please note the show has been extended till the 4th of september.
Posted by Suresh Jayaram at 11:59 AM No comments:

Here are four individuals who have been behind the art scene in Bangalore. Their ability to absorb the aesthetics around them is remarkable. Each of them has developed his/her own sensibility to look at the alternative art practices of the city. As individuals they have supported and worked to make these spaces lively. They moved beyond being mere technical facilitators and have had a bond with the artist community. These artistic interactions have had an undeniable impact on them; and have resulted in this exhibition. This is an attempt to showcase their creative abilities and acknowledge their presence.

Prabhakar .D.R has been working with the ‘Max Mueller Bhavan’ (Bangalore) from past four decades as a technician, though he has informally been a multifaceted assistant. Mohana has been the caretaker at ‘No1.Shanthiroad’ for the past decade. Subbaiah has been assisting ‘Samuha’ and otherwise he is a vegetable vendor and mason from the outskirts of Bengalooru. Shiva hails from a farming community and is a cop by profession. He currently manages No.1Shanthiroad.

-- This show is an initiative by Surekha

Your DREAM HOUSE -Bengaluru: an installation by Baptist Coelho 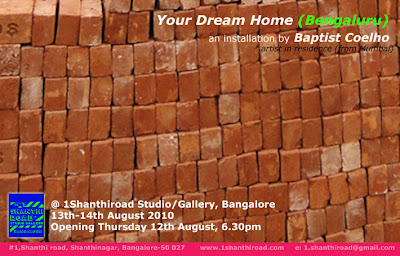 The city of Bangalore is strategically located in the heart of Southern India, and has emerged as a cosmopolitan city with many epitaphs .Dubbed as the future city by Jawaharlal Nehru it has a reputation of being the hub for science and technology of the country.

Migrants have been part of the city’s fabric. The city became the destination for many who were lured by the public sectors, Information technology and Bio technology. There has been a pressure on development and housing and this is visible in the erratic traffic, bottlenecks that have congested the city.

The problem of housing and infrastructure are fundamental to Bangalore. The most common sight in the city is demolition and construction. Housing has been a significant issue, the past exists in the romantic colonial Bungalows of the British, the city soon expanded with middle class BDA housing sites, flats emerged to dot the skyline, villas and gated communities insulated the rich and the city spread out in all directions with new expansion plans and the inherent problems of civic amenities.

In 1537, Kempe Gowda built four watch towers in Bengaluru, locating them at the cardinal directions - North, South, East and West. These were built on rock outcrops and marked the predicted limits to where the city would grow. Over the centuries, the city has developed into one of the most populated cities in India and has also been nicknamed “the Silicon Valley of India” because of the information technology industry established there. This growth has presented the city with unique challenges; one of them being, infrastructure. The .Real estate boom changed the landscape with investors and developers pitching in to house the teeming masses. They are many who left unable to cope with the city’s pressure but the weather seems to be the greatest incentive to stay.

Between the nexus of administrators, Politician, builders and real-estate developers, housing has been a mirage for many .The Dream house project explores the aspirations of the citizens and the young, it looks at the rapid real-estate development and the apathy of the government that is unable to house the poor and marginalized.

Your Dream Home (Bengaluru), is an installation which draws reference to rock outcrops and the Kempe Gowda Watch Towers. The stack of bricks which are seen near construction sites create their own man-made outcrop and become a contrast to those natural rock formations which form the base of the watch towers.

The installation consists of locally-sourced, red bricks which have been assembled to represent one tenth of the actual 60 X 40 feet, which BDA sells as property. Immerging from the top of the stack is a window which was once part of a Bangalore household. From the base, emerge handwritten notes which have been written by the locals of Bengaluru and are arranged on the floor to form the foundation and shadow of this brick tower. These handwritten notes describe the aspirations of the ideal home of these people and contrast sharply with the weight of urban development and the reality of the limitations on their lives.

Baptist Coelho is a mumbai based artist. Your Dream Home (Bengaluru) was realised during Baptist Coelho’s Artist-in-Residence program at 1Shanthiroad in Bengaluru, India, 2010. 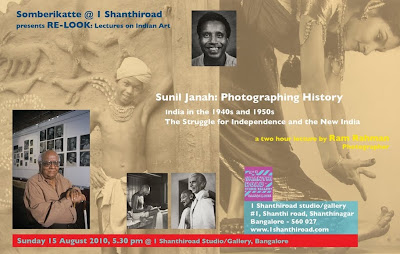 Documentary photography and its legacy in India has never been properly contextualised and has not even been accessible. Rahman situates Janah in a discourse on art and politics, particularly at that cultural moment in India's history, when the Left dominated that discourse. This will be a long lecture, with scores of images, and is a rare chance to see many images which are not available in print.
--
Ram Rahman, photographer and cultural activist (b.1955) graduated with a BSc from MIT and an MFA from the Yale University School of Art. While at MIT he studied Mughal Painting with Stewart Cary Welch and Gupta Sculpture with Pramod Chandra in Harvard, and photography history under Eugenia Parry Janis at Wellesley. Ram is a founding member of SAHMAT, the Safdar Hashmi Memorial Trust, and has been a team member conceiving and curating many of their events and exhibitions. He curated a major retrospective of the photos of Sunil Janah in New York in 1998. His photography has been shown around the world, and he has written and lectured in institutions worldwide. His last major exhibition Bioscope was held at Rabindra Bhavan in 2008 along with a book of the same name.
...
* This is the fifth in the Re-Look: Lectures on Indian art series.
Somberikatte is an initiative by Pushpamala N.
Posted by Suresh Jayaram at 10:36 AM No comments:

They come in standard sizes-' A Show by Sally Wright 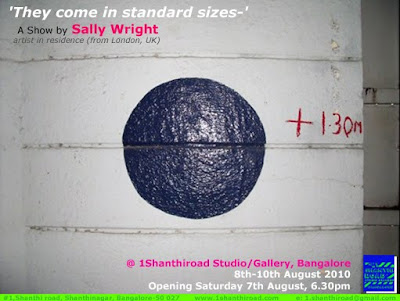 They come in standard sizes-' A Show by Sally Wright
Artist in residence (from London, UK)

8th-10th August 2010
Opening Saturday 7th August, 6.30pm
...
As a first time visitor to India I have been fascinated and overwhelmed by the visual chaos of Bangalore... particularly in relationship to the structures and frameworks within Indian culture- religious symbolism and rituals, visual markings, warnings and symbols dotted throughout the streets, to the unspoken rules of daily life.

I come from a culture where there is an object for every activity possible. These objects are manufactured in factories throughout the globe and presented to us wrapped and virginal in window displays and on shop shelves, without us always been fully aware of their history. Objects seem to be given a full and generous life within India. They are layered with symbolism and historical understanding, they are reused, reinvented, recycled and lived to their fullest, and their industry and production is laid out in the streets for all to see.

One object in question is the tarpaulin. It is used in housing families, demarking construction sites, wrapping piles of coconuts, covering market stalls and street vendor’s wares. It can be an awning, a roof, an encasement and a wall, a toy, a shield of privacy and a dwelling. A tarpaulin has unspoken rules attached to it in this city; it is an object that has such a presence through its absolute functionality yet is seemingly invisible due to its status and commonality.

In my work at 1 Shanthi Rd. I am exploring the spoken and unspoken rules of objects that I encounter within this new culture and how they are presented to us visually to produce a new multi media exhibition.
- Sally Wright
...
Sally Wright is an artist who lives and works in London. She has a MFA (Fine Art) from Slade School of Art, London and BA in Textile Design from Glasgow School of Art.
She is currently artist in residence at 1Shanthiroad studio/gallery.
www.sally-wright.co.uk
Posted by Suresh Jayaram at 2:34 PM No comments:

Blindfolding Aesthetics: The Image in and of Law - Talk by LAWRENCE LIANG

Blindfolding Aesthetics: The Image in and of Law
a paper presentation by
LAWRENCE LIANG
Friday 6th August 2010, 7:30pm
@ 1Shanthiroad Studio/Gallery
---
Blindfolding Aesthetics: The Image in and of Law
Law seems to have a parallel life in the world of images and the media is saturated with cultural images of legality. How do we think of the relationship between law and the image. A dominant mode in censorship debates for instance has been an obsession with the control of the image by the law, and a need to separate the domains of Law and Aesthetics. In this paper I would like to open up a different way of thinking about the cultural life of law by looking at how the presence of contentious images in the media provides us a different way of looking at law and the senses. Law’s encounter with images opens outs an affective space which allows us to think about the aesthetics dimensions of law and legality, and how the imagination of law entrenches itself not only through rules and public reason, but also through language and through images.
- Lawrence Liang 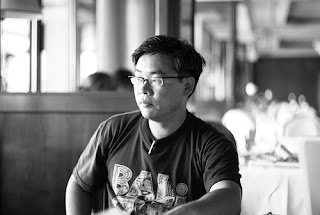 Lawrence Liang is a researcher and writer with the Alternative Law Forum. His interests are in the intersection of law and culture, and he is currently working on a book on Law, Justice and Cinema in india.

Posted by Suresh Jayaram at 6:43 PM No comments: