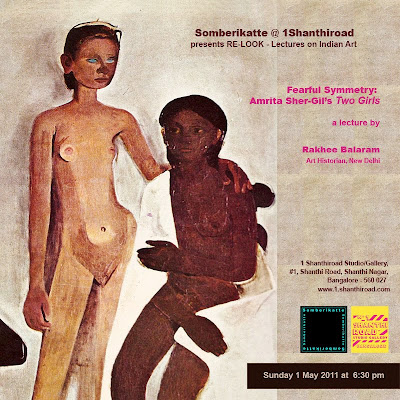 This paper critically examines the duality embedded in Amrita Sher-Gil’s portrait Two Girls from the period of 1939. In the light of new materials and archival documents recently published on Sher-Gil by Vivan Sundaram, the portrait will be contextualized in terms of the representation at a time of heightened political tension in Hungary as well as a wider reading of the work against a backdrop of nationalism and colonial rule in India. It further engages the notion of flesh, erotic conflict and adolescent sexuality with relation to the two naked girls - one dark skinned and one light skinned that the artist portrays. Sher-Gil’s own words and photographs, the complexity of her memory, dreams and reflections and the artist’s own intimate anxieties and struggles to develop a ‘modern’ style of painting reflect a woman who used her artistic and critical sensibilities to forge her future and her painting in terms of the thrust of her ambition and the disquiet and failures of her past. The personal becomes the political, ambition becomes desire and the sullenness and ‘unreadability’ of Two Girls becomes as poised and self-contained as an unexploded bomb.
...
Dr. Rakhee Balaram holds two doctorates, in French Literature and Art History, from Cambridge University and the Courtauld Institute of Art in London. Specialist in modern and contemporary art, she has various publications on the aspects of twentieth century art and literature. She has also contributed to Vivan Sundaram’s Amrita Sher Gil: A Portrait in Letters and Writings ( Tulika 2010) . She is currently a visiting professor at Jawaharlal Nehru University, New Delhi.
...

*RE-LOOK - Lectures on Indian ArtThis series of lectures will present exciting new research being done in the areas of art history, art practice and visual anthropology in India, each for the first time in Bengaluru. Distinguished art historians and academics will be invited to give illustrated papers on their recent work and interests. There will be a lecture every month, which will take place at the popular artist space 1Shanthiroad, situated in the heart of the city.

*Somberikatte: Somberikatte is a Kannada word meaning idler’s platform- usually the platform around a large tree where people gather to gossip and exchange news. It is a fictional institution, sometimes a forum, sometimes a film production company or the name of a photo studio, used by the artist Pushpamala N.

*1.Shanthiroad: The Studio/Gallery at 1.Shanthiroad, Bangalore, is an independent artist run space for art residencies, slide lectures, small conferences, exhibitions, performances, screenings and informal gatherings. Centrally located with an award winning design, it was initiated by Suresh Jayaram and is administered by a not-for-profit trust VAC – Visual Art Collective.
www.1shanthiroad.com....
Posted by Admin at 11:30 PM