Re-Look Lecture by Kajri Jain : The Handbag that exploded 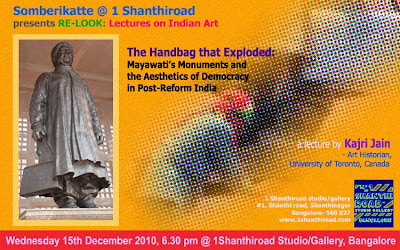 The Handbag that Exploded:

Mayawati's Monuments and the Aesthetics of Democracy in Post-Reform India

The Handbag that Exploded:

Ever since the Bahujan Samaj Party leader Mayawati came into power as Chief Minister of Uttar Pradesh she has been at the centre of media controversy, most recently because of her massive drive to build monuments and statues of ‘Dalit icons’, including, notoriously, statues of herself holding her trademark handbag. The media coverage so far has largely represented majority public opinion as ‘infuriated and sickened’ at her profligate waste of public money on party propaganda and ‘self-aggrandizement’ rather than the material betterment of her constituency. To this opinion, propounded by right and left alike, is opposed the (almost exclusively Dalit) defence that Dalits have a legitimate claim to being represented in the same forms that have hitherto been available to others. The paper argues that aesthetic redistribution – in this case, the emergence of new forms of Dalit cultural expression – is neither ‘merely’ symbolic nor ‘essentially’ economic, but material/sensible in ways that speak to both culture and economy.

Kajri Jain teaches in the Department of Visual Studies and the Graduate Department of Art History at the University of Toronto. Her research is on image-cultures in India, with a focus on the interface between images, religion, and vernacular business cultures; she also teaches modern and contemporary Indian art and cinema. She is the author of Gods in the Bazaar: the Economies of Indian Calendar Art (Duke University Press, 2007), and is currently working on a book on the emergence of monumental iconic sculptures in contemporary India.

*Somberikatte: is a Kannada word meaning idler’s platform - usually the platform around a large tree where people gather to gossip and exchange news. It is a fictional institution, sometimes a forum, sometimes a film production company or the name of a photo studio, used by the artist Pushpamala N.