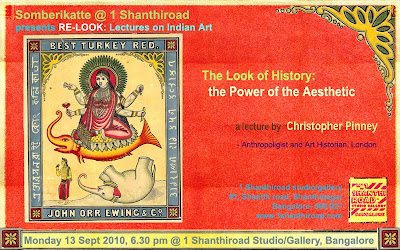 “ The Look of History: the power of the Aesthetic ”

a lecture by Christopher Pinney

The Look of History: the Power of the Aesthetic

William Blake angrily scribbled ‘Empire follows art, and not vice versa’ in his copy of Reynolds Discourses on Art. This insight prefigures recent texts by Lyotard and Rancière. This talk sketches a history – up to the present – of the power of the aesthetic in India via indigo, Birsa Munda, B. R. Ambedkar, the India Shining campaign of 2004, and contemporary Dalit shamanism in Madhya Pradesh.

Christopher Pinney, anthropologist and art historian, is widely recognised as an authority on the popular art and visual culture of South Asia. He is the author of several influential books including Camera Indica: The Social Life of Indian Photographs and Photos of the Gods: Printed Image and Political Struggle in India. His most recent book is The Coming of Photography in India (British Library, 2008). Photography and Anthropology is forthcoming from Reaktion. Christopher Pinney teaches at University College London.

*Somberikatte: Somberikatte is a Kannada word meaning idler’s platform- usually the platform around a large tree where people gather to gossip and exchange news. It is a fictional institution, sometimes a forum, sometimes a film production company or the name of a photo studio, used by the artist Pushpamala N.

*1.Shanthiroad: The Studio/Gallery at 1.Shanthiroad, Bangalore, is an independent artist run space for art residencies, slide lectures, small conferences, installations, performances, screenings and informal gatherings. It was initiated by Suresh Jayaram and is administered by a not-for-profit trust VAC –Visual Art Collective.

Posted by Suresh Jayaram at 3:48 PM