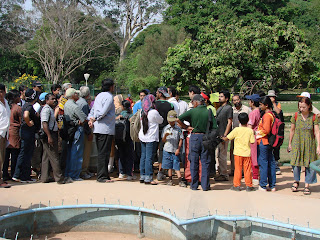 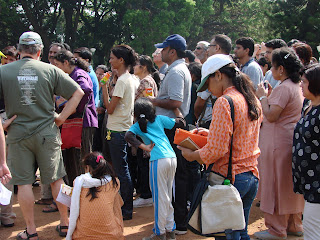 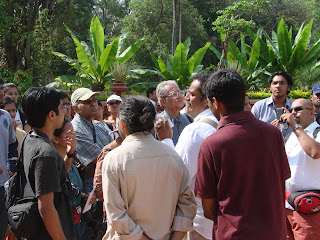 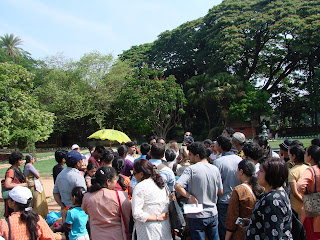 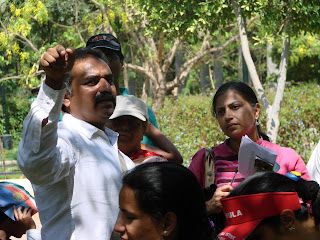 The Nature and Heritage walk at Lalbagh, is an attempt to look at the familiar in a new perspective. Many of us have seen the sites Lalbagh offers us, enjoyed the bi-annual flower shows. Or just being regular walkers in this historical lung space of the city. On the summit of the Lalbagh rock is the Kempegowda watch tower, an important vantage point to survey the city in a significant Landmark in the history of making of the City of Bengalooru. Incidentally, this is also the place where the British artists like Robert Colebrooke, Claude Martin, James Hunter and Robert Home, recorded the Sultan’s cypress garden, the pettah beyond, and the droogs in the distance.

According to popular tradition, this is one of the four watch towers, said to have been built by Kempegowda of Magadi (1521-1569) and predicted the limits of Bangalore. The other three towers in the cardinal directions are situated in Gavipuram, near Gavigangadhareshwara Temple, overlooking the Kempambudi Kere,Ulsoor lake,Ramana Maharishi Park.This spot became a convenient spot for many Painters to compose landscapes of the city.Later the mantapa has become the insignia of the Bangalore City Corporation.

The making of Lalbagh, has a long pre-colonial history, which connects the site to Hyder Ali (1761 – 82) and Tippu Sultan (1782 - 99). During this period the garden was maintained by a Daroga (Chief Gardner) named Mohammed Ali. Lalbagh came into possession of East India Company’s Botanist Major Waugh. This was also the period when horticultural community of Thigalas were brought here.

The walk intends to enlighten you with the historical, botanical, horticultural details that have made Bangalore as the chosen site for experimentation and exploration in horticulture. The concept of the garden as seen by the British as a public space connected to a zoo and museum

When we look at the designing the Lalbagh in the colonial era there was a conscious decision to construct. the landscape with an ‘Clasical style’. The axis was a predominant marker that defined the space, their was an appreciation of balance, symmetry and geometry, sit on the opposing end of the spectrum from English garden design. Where formal gardens find beauty in linearity, English gardens use undulating lines. Where formal gardens seek right angles, English gardens use few, if any, angles. This was not only a political decision but also an aesthetic one ,it literally ploughed through the sultan’s garden or the “char bagh”. The larger plan included a Glasshouse- arborium,fountain,bandstand,topiary etc.

THE FOUR PILLARS OF LALBAGH

F important people have extensively contributed for the development of Lalbagh

John Cameron is regarded as the ‘Father of Horticulture’ in Karnataka. His achievements are numerous and multifaceted. He enriched the plant wealth of Lalbagh by introducing countless native and exotic plant species, many of which later assumed the status of commercial crops like apple, guava, carrot, radish etc. It’s the idea of John Cameron who conceived the idea of constructing a conservatory (glass house) for acclimatizing exotic plants and also for holding flower shows. Accordingly, the ‘Albert Victor Conservatory’ (the present Glass House’ was erected during 1889 – 90. John Cameron also started a zoo at Lalbagh on systematic lines, mostly for entertainment to the children. It during his tenure that the Lalbagh tank was also built in 1890. The original area of Lalbagh, which was hardly 40acres, increased to almost 100 acres due to his efforts.

Recognizing the work at Kew Garden, London, the authorities sent Krumbiegel to the post of curator of the Botanical Garden at Baroda. It is his service here that brought him down to the south. He was invited by Krishnaraja Wodeyar, the Maharaja of Mysore, to serve his kingdom. In the year 1908, G.H. Krumbiegel succeeded John Cameron. He introduced several species of plants into Lalbagh and was responsible for Banglore’s serial blossom – ‘Ritusamhara’. His other contributions includes laying out important parks and gardens including the .Brindavan Gardens at K.R.S, Mysore.

Rao Bahadur H.C.Javaraya entered his service as Botanical Assistant at Lalbagh, Bangalore in the year 1918. During the tenure of Mr.Javaraya, the eastern wing of the Glass House was erected during 1935. During the late 30’s, a ‘lantern shaped’ guard tower was erected at the Basavanagudi gate of Lalbagh.He was appreciated by Sir.Mirza Ismail, the Dewan of Mysore. He was instrumental in creating an artificial cascade named as Jaya Cascade. He also started the Maddur fruit orchard, Ganjam Fig Garden and the Government Fruit Research Station at Hesarghatta. He was also responsible for establishing the royal fruit orchards – Madhuvan, Mysore. He was awarded the prestigious fellow of The Linnean Society of London.

This walk is initiated by the Goethe.Institut,Max Muller Bhavan.Bangalore as part of their project-BCP-BANGALORE CITY PROJECT.