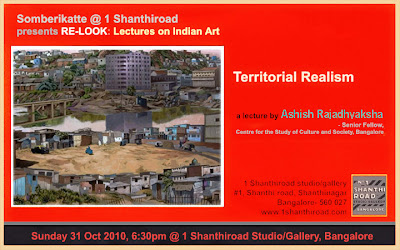 "
Territorial Realism "
a lecture by


Ashish Rajadhyaksha
- Senior Fellow, Centre for the Study of Culture and Society, Bangalore


This presentation inquires into a tradition of arts practice that


emerged in Mumbai through the 1970s and 80s, crucially in the visual a


rts but also including the cinema, theatre and music, when the arts


took on several additional responsibilities that we would usually


associate with human rights. The argument is primarily located around


theatre, Namdeo Dhasal's poetry and independent films from the time,


alongside inquiries into the cultural actions linked to the 1982


textile workers' strike and the claim of the constitutional right of


the city's pavement dwellers to shelter.


Culture & Society, Bangalore. He is the co-author of the Encyclopaedia of In
dian Cinema (1994), and has recently published the book Indian Cinema in the Time of Celluloid: From Bollywood to the Emergency (2009). He has also written extensively on art and was co-curator with Geeta Kapoor of Bombay/ Mumbai at the Century City: Art and Culture in the Modern Metropolis show, Tate Modern, London (2001)
---


is a Kannada word meaning idler’s platform - usually the platform around a large tree where people gather to gossip and exchange news. It is a fictional institution, sometimes a forum, sometimes a film production company or the name of a photo studio, used by the artist Pushpamala N.


*1.Shanthiroad:
The Studio/Gallery at 1.Shanthiroad, Bangalore, is an independent artist run space for art residencies, slide lectures, small conferences, installations, performances, screenings and informal gatherings. Centrally located with an award winning design, it was initiated by Suresh Jayaram and is administered by a not-for-profit trust VAC – Visual Art Collective.

Posted by Suresh Jayaram at 3:51 PM