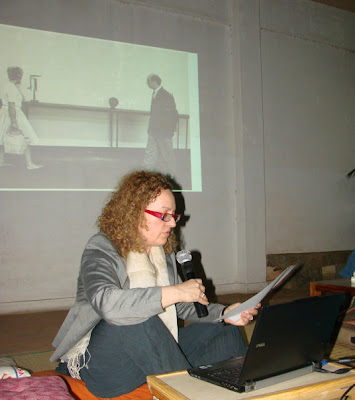 Presentation and Discussion at 7pm
14th Sunday February, 2010
@ 1Shanthiroad Studio/Gallery
The documenta is regarded as the most important exhibition of contemporary art drawing attention from all over the world. It was initiated in 1955 by the artist and art educator Arnold Bode in Kassel, Germany. The singular character of the exhibition has been preserved. Every five years, a new director is chosen and the exhibition is reinvented, a concept which to date has been affirmed by the public’s interest. A curator and writer, Christov Bakargiev is the Artistic Director of Documenta 13, 2012.

In this talk, Bakargiev will share some notes about Documenta 13 to be held in Kassel 2012 while articulating how large exhibitions shape visual culture and the sharing of world views.
Carolyn Christov-Bakargiev has been Chief Curator at Castello di Rivoli Museo d’Arte Contemporanea from 2001 to 2008 and was interim director for 2009. The author of publications including Arte Povera (London, 1999), she was Senior Curator at P.S.1 Contemporary Art Center/ a MoMA affiliate, New York from 1999 to 2001. Curated exhibitions include ‘On taking a normal Situation and retranslating it into overlapping and multiple readings of conditions past and present, Antwerp(1993), The Moderns, Rivoli-Turin (2003) and Faces in the Crowd, London and Turin(2004). She co-curated the first edition of the Turing Triennale (2005) and in 2007-08 she was Artist Director of the 16th Biennale of Sydney – Revolutions – Forms That Turn (2008), a constellation of works exploring the impulse to revolt and the forms embedded in the etymology of the word ‘revolution’ as well as the relation and the gap between revolutionary art and an ‘art for the revolution’
Posted by Suresh Jayaram at 1:43 PM